Thank you for supporting small businesses like this one, we appreciate it.

How do you know when it’s too late to transfer 8mm or 16mm film?

Does your 8mm or 16mm film smell like vinegar?

Due to the age of most film it’s becoming a lot more common to see signs of film going bad. We’re seeing more and more reels of film showing signs of 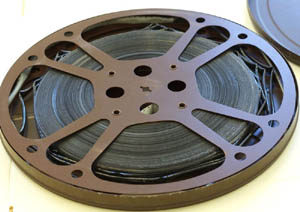 fading, warping, color-shifting, shrinking, mold, and acetate film base degradation, often referred to as “vinegar syndrome” due to the overwhelming vinegar-like odor coming from the film itself. 16mm film seems to deteriorate faster than 8mm film.

There is an article on the National Film Preservation Foundation’s website that discusses vinegar syndrome.  It mentions “The symptoms of vinegar syndrome are a pungent vinegar smell (hence the name), followed eventually by shrinkage, embrittlement and buckling of the gelatin emulsion.

If your film looks bad or smells like vinegar does that mean it’s too late to transfer?

Not necessarily. We have found in some cases it was just the outer layers that were damaged beyond recovery and we were able to transfer the rest of the film. We’re never sure how much film is recoverable until we try. If the contents of the film are important to you then it’s worth bringing in. We never charge for the film we are unable to convert.

Does your film have mold? 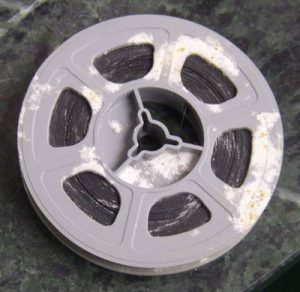 Storage in warm and humid conditions greatly accelerates the onset of decay. Once it begins in earnest, the remaining life of the film is short because the process speeds up as it goes along.”

Mold has become another threat to the longevity of film. Reels having a noticeable amount of mold are likely to have damage to the image.

Needless to say, that if you still have any home movies lying around in a closet, this would be the best time to transfer them to video before they disintegrate.

Every month that goes by can mean the difference between whether the film can be transferred or not. Some films are sadly beyond saving.

In many cases, portions and sometimes all of a 8mm or 16mm film reel can still be transferred even with mold or vinegar syndrome. We’ve been able to convert more than 99% of the film brought in to us.

Bring your 8mm and 16mm films in today for a FREE evaluation. We’ll let you know if transfer is still possible.

Find out how much it costs to transfer 8mm and super 8 film to digital and DVD here.

See how much it costs to transfer 16mm film to digital and DVD here.