What’s the difference between 8mm film and 8mm video tape?

We get a lot of calls from people with questions about transferring 8mm film to digital and DVD. After several minutes of conversation I discover they are actually talking about 8mm video tapes they want to convert, not film.

Other times people have called inquiring about converting 8mm video to digital or DVD and we find out they really have 8mm film instead.

The “8mm” reference used for both 8mm film and 8mm video refers to the width of the film or video tape in millimeters (thus the “mm” after the 8). You’ll find a photo of each below. 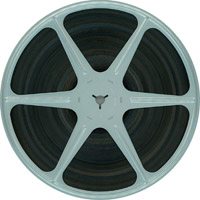 8mm movie film became available back in the 1930s. Super 8 film was introduced in the late 60s and 70s. Super8 film was the same width (8mm) but with smaller sprocket holes down one side that allowed the picture to be larger.

Sound later became available on super 8 film by adding a thin brown magnetic recording stripe along both edges of the film. A super 8 sound camera and projector are required along with a microphone for recording and playing the sound.

After shooting (exposing) the entire roll of film it would then be sent out for processing. That’s where they develop the film and then put in onto a 3 inch circular reel that can be loaded onto a movie projector and projected onto a screen (or wall) for viewing. When the end of the reel is reached it would then need to be rewound back onto the original reel before loading the next reel.

Each of the 3 inch reels would only run for about 3.5 minutes. Larger reels (up to 7 inches in diameter) could be purchased for combining several 3 inch reels together in order to make the viewing time longer before needing to rewind the film.

In the late 1970s Polaroid introduced a new type of 8mm film called Polavision. The film is housed in a rectangular cartridge that was used both in recording and playing back the film.

A special Polavision player was needed for the playback process. With the Polavision players being very difficult to find now, the film can be removed from the cartridge and put onto a circular 8mm film reel for transfer to digital or dvd.

The process for transferring 8mm and super 8 film to digital and DVD is different than for 8mm video and so is the cost. More information and pricing for the 8mm film can be found on our 8mm and Super8 film transfer page.

8mm video tapes came out in the 1980s referred to as Video 8.  As the inventor of video 8 Sony later introduced the Hi8 tape increasing the video resolution to 400 horizontal lines. Sony, Canon and Sharp were the main companies making video cameras in these formats.

Years later Sony released the Digital 8 tape format using essentially the same tape but recording the video information in digital rather than analog.

8mm video tapes had to be played back using the camera connected to your TV unless you happened to own an 8mm video player.

The process for transferring 8mm, video 8, hi8 and digital 8 to digital and DVD is different than for 8mm film and so is the cost. Additional information for 8mm, Hi8 and digital 8 video is available on the 8mm video transfer page.